What it must have been like in the writing room for the BBC’s three-part drama of Little Women; trying to decide which scenes were imperative and which expendable so they could fit it into a three hour production. As such, I could forgive them some of the missing details. It’s understandable why the Pickwick Papers didn’t make it into the filming schedule – after all, when I last read Louise May Alcott’s classic novel, I admit I skipped that chapter myself. So this review is not focused on the inconsequential scenes not present in the adaptation; my review is much, much more on the essential ones they missed out. 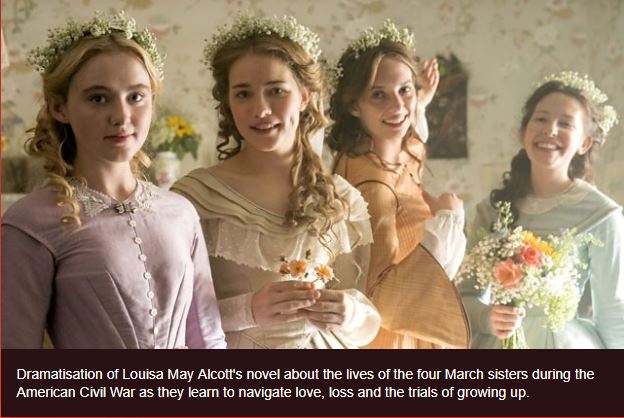 It was only in the final part of the drama that fury got the best of me. After tears of nostalgic grief for poor Beth my disappointment rallied as I realised that the BBC had skipped the most essential aspect of Alcott’s story. Our heroine Jo, whose one staunch characteristic has thus been her reluctance to marry (to be a tomboy, to not have to bow to convention, or even stoop so low as to fall in love to begin with!), is seen to change her mind on a whim. The BBC had her place her hand in the Professor’s and there we have it, job done: let’s skip to years later.

Not to mention that they eliminated one of the pivotal moments in the entire novel. Any storyteller knows that in order for their narrative to be successful something – or someone – has to change. With Alcott, all of her ‘little women’ make transformations; Amy from spoilt child into lady of admirable taste, Meg into a housewife happy with her lot, Beth…well, perhaps not Beth who will always remain so. Yet, the biggest transformation in Little Women happens to Jo. By the time she is reinstalled at the March household, trying desperately to replace Beth’s goodness with her own, she is convinced that life for her shall be one alone. That is, of course, until her Professor comes visiting.

What the BBC did, in wrapping Jo’s story up so swiftly and subtly, was rob all of Alcott’s biggest fans of their favourite ending. They neglected their main character, the driving force behind the story – for if it were not for boyish Jo the Marches may never have met Laurie next door, or become so acquainted with his teacher, nor would Beth have had to visit the Hummel’s alone – all of which would have turned the story on its head with no marriages for Amy and Meg, and perhaps a brighter future for dear Beth.

But the exclusion of Jo’s pivotal moment as she stands out in the rain with the Professor under that umbrella is, for me, inexcusable. The BBC had it, it was right there; if they had skipped over Meg’s disastrous attempts at jam making (which had no consequence given that they missed out John bringing home an unexpected guest) they would have made room for the crucial, most-tender moment for Jo’s character:

“Ah, thou gifest me such hope and courage, and I haf nothing to gif back but a full heart and these empty hands,” cried the Professor, quite overcome.

Jo never, never would learn to be proper; for when he said that as they stood upon the steps, she put both her hands into his, whispering tenderly, “Not empty now”; and stooping down, kissed her Fredrich under the umbrella.”

This is the happy ending that we all waited for; not the ribbon-wrapped scene of the March women sitting in the fields around Plumfield years later, with a thinly veiled hint that Amy’s child is sickly like her departed auntie Beth.

So, it’s no lie to say that had I been in that writing room at the BBC I would have fought for Jo’s alteration of character to be central to that final instalment, to let her have that proposal out in the rain and not simply alluded to with a hand in hand exchange during a sing-along. Little Women, for many, is defined by Jo’s story – in some ways Alcott’s story herself – and the BBC seem to have forgotten that. I was hopeful for this series drama because I adore Little Women and would gladly sit through their stories time and time again. But when such an integral aspect of the book is so neglected it tarnishes the whole and, as such, I’m not sure I can forgive the BBC for their adaptation of Alcott’s classic work when it so callously robbed me of my favourite parts.